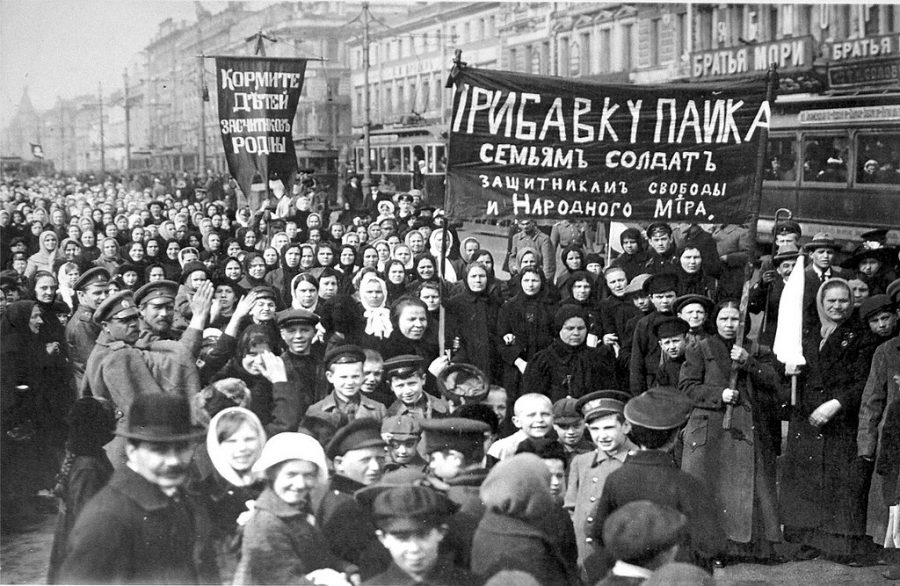 With an agrarian Russia and power concentrated in the hands of Tsar Nicholas II, hunger and war did not take long to cause serious discontent among the population. The result was a series of uprisings that led to the establishment of a communist system in the country.

Origin of the Russian Revolution

Russia at the beginning of the 20th century was a country practically anchored in a feudal system. The nobility, the Orthodox Church and the Tsar were the dominant classes in a Russian society where freedoms were conspicuous by their absence.

Meanwhile, the weak bourgeoisie defended the need for greater political representation of Russian society, while the peasants were outraged by insufficient land. Although Russia had increased the number of factories, its industry continued to be small, since it was an eminently rural society.

Although the Russian Social Democratic Party had been created in 1898, it still lacked the necessary social force. Within this political party there were two political currents: the Mensheviks (moderates) and the Bolsheviks (radicals).

To further social discontent, Tsar Nicholas II, believing that he could win a war against Japan, embarked the country in a warlike conflict. However, the outcome of the Russo-Japanese War (1904-1905) was disastrous for Russia.

The deterioration of the political situation caused a social outbreak in 1905 on what became known as Bloody Sunday. That January 22, when the people demanded political changes before the Winter Palace, they were brutally repressed. Some military units even rose up, as happened with the mutiny on the battleship Potemkin.

Strikes, protests and uprisings eroded the figure of Tsar Nicholas II, who was forced to make concessions. For its part, the 1905 revolution established the workers’ movements as protagonists of the revolution, while at the same time they began to organize themselves into a kind of cells called soviets.

The reforms that the tsar had promised in 1905 were frustrated and the famine began to take its toll on the population. The regime turned a deaf ear to the demands of the people, with decisions being concentrated in the hands of the Tsar, the Empress and Rasputin.

Unfortunately, Russia embarked on the First World War with dire consequences. The peasants were called up to fight at the front, which left the countryside without manpower. The lack of food was not long in making itself felt. While Russia suffered painful defeats on the battlefields, its economy had been cut off from European markets and morale declined among a starving population.

Causes of the Russian Revolution

In summary, as we explained in the previous section, the causes of the Russian Revolution were:

Stages of the Russian Revolution

The stages of the Russian Revolution were as follows:

Next, we will develop each of these phases.

The February Revolution of 1917, Lenin and the Provisional Government

It was February 1917 and Russia was gathering all the factors for an uprising to take place: famine, war, and a harsh winter. Demanding bread, land and peace, on February 23 a demonstration took place in the city of Saint Petersburg. On February 25, the labor movements protested with a general strike and, not long after, Russian troops would join the people in their uprising.

Against peasants, soldiers and workers, Tsar Nicholas II decided to abdicate. Thus, a provisional government headed by Gueorgi Lvov was formed from March 15, 1917. This provisional and liberal government also included the Mensheviks, the moderate wing of the labor movement.

However, progressively, the most radical sector of the labor movement, led by Lenin, was gaining strength in Russia. Thus, in April 1917, Lenin proclaimed the division of the land, the exit of Russia from the war and an alliance between the workers in the fields and in the factories. All this meant the rejection of any type of collaboration with the provisional government.

Lenin came from an ideological current such as Marxism and saw the First World War as a great conflict between empires and markedly capitalist. For this reason, he saw the end of the war and the launching of a socialist revolution as imperative to establish the dictatorship of the proletariat.

But, for the provisional government, Lenin’s proposals were unthinkable. Russia continued in the war and the human losses on the battlefields were appalling. All this led to an uprising in Petrograd on July 3, 1917. With the failure of the insurrection, Lenin had no choice but to go into exile.

Continuism in the provisional government

Bad news came from the front, as Russia did not stop reaping military defeats. Kerensky, who at that time headed the provisional government, was immersed in a strong confrontation with General Kornilov, a markedly conservative military man who wanted to return to an autocratic government. Both the provisional government and the Soviets thwarted the Kornilov uprising. Now, those who took the lead and the initiative were the Soviets, as they were the most active in thwarting the Kornilov coup.

Since the beginning of October 1917, Lenin had been planning the revolution, the assault on power. Finally, the Bolshevik Central Committee gave the go-ahead to the armed actions.

Finally, on October 24, the Bolsheviks seized key points in the city of Petrograd. The next day, the Winter Palace was stormed and Prime Minister Kerensky chose to flee the country.

The revolution soon spread throughout the country and Moscow ended up falling into the hands of the Soviets. However, the Bolsheviks had not come to control all of Russia. There were territories dominated by the old authorities that were not willing to surrender to the Bolsheviks. Thus, the civil war was served.

On October 26, 1917, the Bolsheviks formed a government, with Lenin at the head and personalities such as Trotsky and Stalin as ministers. They had to address three major issues: the end of the war in Russia, the distribution of land and the concentration of political power.

In line with the socialist ownership of the land, a division of the countryside was carried out trying to put an end to the shortage that Russia suffered. There was no financial compensation of any kind for the landowners.

With regard to the First World War, Russia abandoned the conflict with the signing of the Brest-Livtosk treaty. Despite the loss of significant tracts of land, the Bolshevik government believed that the suffering caused by the war was worth ending.

Taking all political power, the Bolsheviks took it upon themselves to eliminate the bourgeois parties. On the other hand, the elections to the Constituent Assembly gave the majority to the Mensheviks, thus leaving the Bolsheviks in a minority. But the government dissolved the Assembly in January 1918 and the Bolsheviks ended up establishing their hegemony in power. Thus, other actors of the revolution such as social revolutionaries, anarchists and Mensheviks were left out. Political power was taken over by the Bolsheviks.

Months later, in July 1918, Russia was constituted under the name of the Federal Socialist and Russian Soviet Republic.

In 1921, Russia was still licking its wounds after a protracted civil war. The economic indicators showed a bleak reality for the country. The national production data was terribly discouraging. Let’s take several examples:

To put a solution to this harsh economic outlook, they bet on the NEP or New Economic Policy. In this regard, they sought to combine measures of a socialist character with some characteristics of free mercad or. For this reason, private property for the peasants was legalized while the circulation of the currency was restored to face the hyperinflation that devastated the country.

This economic policy was based on the need to obtain a surplus of agricultural production that would allow the cities to be supplied and that, at the same time, contribute to the economic growth of the nation.

As for the industry, small companies became denationalized, while large companies remained in the hands of the State, although granting some elements of self-management.

By 1926 Russia had already been remade, recovering the production levels prior to the First World War. But in the agricultural sector there was strong discontent, since the kulaks were farmers who had become rich and, accumulating large sums of money, they acted by offering loans with high interest. Nor should we ignore the existence of intermediaries (nepmen) who resold agricultural products obtaining considerable profit margins.

Problems also arose due to the disparity in prices. The New Economic Policy favored agricultural production, so that, at one point, agricultural prices were much lower than the prices of industrial goods. All of this ended up causing shortages.

Thus, among the ranks of the Communist Party and especially Stalin, a reestablishment of capitalism was seen in the NEP. For this reason, the Russian economy became in the hands of the State, which organized it through five-year plans.

Consequences of the Russian Revolution

The main consequences of the Russian Revolution were:

Characteristics of the Russian Revolution

Among the characteristics of the Russian Revolution, we can highlight:

Summary of the Russian Revolution

The Russian Revolution was a process of regime change in a country governed by a monarchy that concentrated power in the figure of the Tsar. The economic crisis and the war conflicts had weakened the ruling class.

With the people and the army against it, the czar resigned, after which a provisional government was established in March 1917. However, this would not last long and in October of that same year, with the leading role of the working class, the Bolsheviks seized power, starting a civil war that lasted until 1920.

Finally, in 1922 the Union of Soviet Socialist Republics was founded, a federal state that sought to implement a communist system, where the economy was under government control.