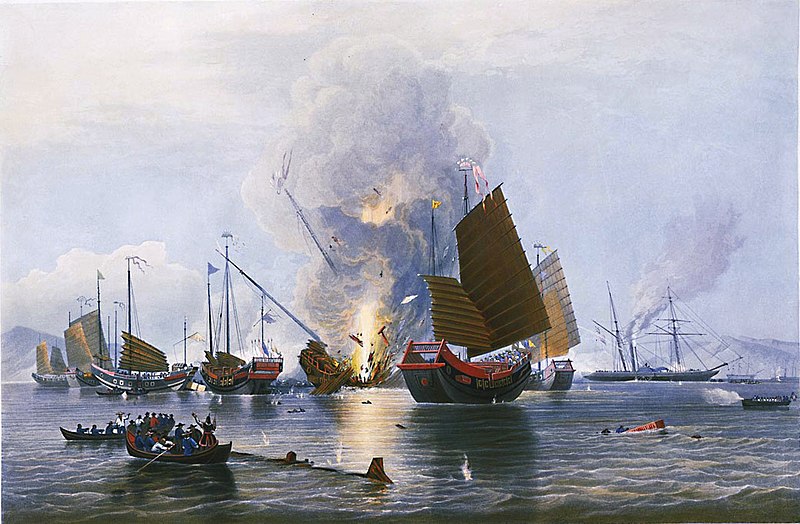 The control of resources, economic supremacy and trade have always been the result of tensions and conflicts between different countries. Precisely, in the 19th century, British commercial interests in China would end up leading to the so-called Opium Wars.

Manchu China in the eighteenth century was a hermetic state, closed to international trade. British diplomacy repeatedly encountered Chinese refusal to establish trade relations. Proof of this was the response of Emperor Quianlong in 1794, who refused to agree to British requests for free trade.

Precedents of the Opium Wars

There were clearly marked limits in foreign relations. In fact, trade was only possible through a few ports, most notably Canton. At the same time, bureaucratic hurdles and tariffs complicated exports to China.

Meanwhile, the Chinese exported huge amounts of products such as porcelain, tea, and silk. However, these types of commercial relations were harming the British, because in addition to the high tariffs and bureaucratic obstacles they endured, the Chinese hardly demanded British products. In fact, the Chinese had little interest in European manufactures, while they saw inferior quality in British textile products.

For their part, the Chinese only accepted payments in silver. Although the Chinese could produce tea year after year, British silver was not infinite, so there was a risk that silver reserves would be depleted and they would not have enough precious metal to back their currency. In such conditions, the trade balance presented a clearly negative balance for Great Britain.

Causes of the Opium Wars

Desperately, the British searched for a way to open China’s doors to trade. It was imperative to correct the imbalance in the trade balance. The answer lay in opium, a plant grown in India. Thanks to the fact that the Indian region of Bengal was under British control, this plant could be massively produced and exported to China.

In China, opium had been viewed as a medicinal plant. However, this drug could be terribly addictive. Thus, consumption quickly spread among the Chinese population, to such an extent that peasants came to spend two-thirds of their income on opium consumption. Such was the rise of opium that the British not only turned to Indian production, but also brought opium from Persia and the Ottoman Empire into China.

Due to the high profitability of the opium business, Chinese merchants were willing to pay the British in silver. In this way, the large amounts of silver spent in China returned to British hands.

The Chinese rulers began to realize the effects that the opium trade was having on their country. Socially, there was a problem, as tens of millions of Chinese had become addicted to opium, while the opium business caused significant corruption. In the economic plane things were not going well either. Profits from the tea trade were rapidly fading from opium.

Ban on the sale of Opium

In view of such a dire situation, Emperor Daouang decided to take action, banning the sale of opium in 1839. To put an end to the consumption of opium and the corruption that had generated his trade, Daouang put one of his most efficient officials, Lin Hse Tsu.

Lin himself would send a letter to Queen Victoria, warning of the immoral British attitude, because while they were trading opium in China, in Great Britain, its sale was prohibited. Despite being intercepted, the letter would end up being made public thanks to The Times newspaper.

Firmly committed to his mission, Lin demanded that the British traffickers deliver all the opium shipments. Given the refusal of the traffickers, the British ships were cut off and a total of 20,000 opium chests burned. British losses were estimated at 5 million pounds.

This incident ended up forcing the British military intervention in China, since the free trade of Great Britain was in danger. Between 1839 and 1842, the British managed to defeat China in what became known as the First Opium War. The Nanking Treaty certified the end of the war and its main consequences were:

However, the first Opium War would not be the only conflict between China and Britain. Thus, from 1856 to 1860 the Second Opium War took place, also motivated by commercial interests. Thus, in China, opium continued to be illegal, while the Chinese continued to maintain an important secrecy towards international trade. For this reason, Great Britain tried to renegotiate the Treaty of Nanking. But the Chinese rejected the British proposals and the Second Opium War began.

On this occasion, Great Britain managed to bring France, Russia and the United States into the conflict. Faced with such a powerful international coalition and with Emperor Xianfeng trying to put an end to the Taiping rebellion in his own country, victory again fell to the side of foreign powers.

The Second Opium War ended with new advantages for the victors (Great Britain, France, Russia and the United States). The consequences were the following:

Another consequence of the Opium Wars and the trade in this plant was the creation of the Hong Kong Shanghai Bank Corporation (HSBC) in 1865. Precisely, the purpose of a bank like HSBC was to manage the profits derived from the opium trade.