The history of marketing or marketing tries to explain how the marketing process was born, evolves and develops . 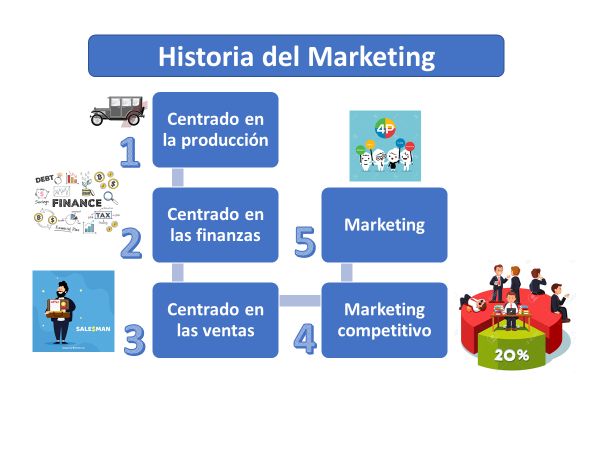 To talk about the history of marketing, we first have to say that it is a tool used by companies to generate processes of exchange of something of value within the market.

Companies are the economic agents in charge of carrying out the production process in the economy. Production is the transformation of inputs into products.

This means that companies have to manage scarce resources to efficiently carry out their production process, which is why they are organized into departments such as:

A company can have many more departments, but these would be the most important

Next, and in the form of a summary on the history of marketing, we will discuss the origin, as well as the different approaches to marketing.

The strategy and techniques of marketing go way back in time, being as old as civilization itself. These were launched at the time when a merchant or business owner was looking to sell more than his competition or reach more potential customers interested in his product or service.

Finally, marketing developed and, more importantly, professionalized with the arrival of the Industrial Revolution in the 18th century. Mass production and the enactment of antitrust laws created the need to differentiate itself from other competitors, who manufactured exactly the same product.

‘Consumption is the sole end and purpose of all production and the interests of the producer should only be served to the extent necessary to promote the intention of the consumer "is a statement written by Adam Smith, in the eighteenth century and is close to lay the foundation for the modern marketing concept. It follows the idea that the main motivation or concern of every manufacturer revolves around those desires and needs of the consumer.

It would be at the beginning of the 20th century, specifically in 1902, when Professor Jones from the University of Michigan used the term for the first time. A few years later, the discipline grew until it reached its autonomy and independence in 1911. Shortly after, in 1914, Lewis Weld brought to light the first scientific research on marketing. Just a year later the first marketing book would be published by Arch Wilkinson Shaw.

It is also important to highlight, in addition to its historical origin, its initial definition. At that time, marketing was in charge of two things: production and product. And, taking that into account, he tried to make the distribution as efficient as possible. Likewise, marketing was limited to commercial activities, for profit. Later, the discipline expanded to other spectra such as non-profit organizations, foundations or even politics.

However, the techniques used then have evolved as the market changes to adapt at each moment of time to habits, consumer trends and new communication channels that are emerging. Therefore, we will continue to explore new ways to reach the end customer in the most effective and efficient way possible.

The different approaches in the history of marketing

After the previous explanations, we have to say that initially in the markets there were more applicants or people with many unsatisfied needs, while the existing companies were very few. That meant there were very few products on the market.

We can note that the companies that took advantage of the industrial revolution and series production models were the most recognized in the market, such is the case of the Ford automobile company.

This meant that the companies that performed better during that time were the ones that managed the financial resource the best.

Then the recessive process happened and the companies then already knew how to produce and had money, then the position of supply and market demand changed, now there was more supply of similar products in quality and prices; relative to market demand.

As we realize up to this point there is no marketing, because practically companies are forcing the consumer to adapt to the product that the company knows how to produce and buy it. They focus on solving the business need, but do not care about the client’s needs.

For this reason, before launching a new product on the market, companies do market research to give that product the attributes and benefits that the consumer wants.

To exemplify this situation, we observe that in the market there are many companies that produce cell phones, which initially served to solve the need for communication. But currently, competitive marketing has achieved that each time a cell phone provides the consumer with additional functions such as camera, videos, entertainment, calculator, research medium, purchasing processes, sales processes, financial applications, weather, calendar, agenda, clock, alarms. , scanner and surely you can list many more.

To end competitive marketing, today we have more and better satisfiers, companies know that to the extent that an unsatisfied need is found, this becomes a business opportunity.

Thanks to this, today we have innovative products, of excellent quality and with affordable prices in the market.