A financial asset is a financial instrument that gives its buyer the right to receive future income from the seller. That is, it is a right over the real assets of the issuer and the cash they generate. 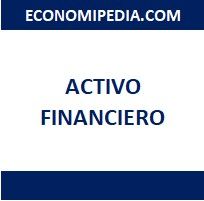 Unlike tangible assets (a car or a house for example), financial assets do not usually have a physical value. The buyer of a financial asset has a right (an asset) and the seller an obligation (a liability). Financial assets can be issued by any economic unit (company, Government, etc.).

A financial asset gets its value from that contractual right. Thanks to these instruments, entities that have debt can be financed and, in turn, people who want to invest their savings get a return by investing in that debt.

Financial assets are represented by physical titles or book entries (for example, an account at the bank).

Issuance and trading of a financial asset

Since it is a title, a financial asset goes through three stages. The first one is its broadcast. That is, the title does not exist and is created. The second stage is the negotiation in the financial markets. Finally, in the third stage, the title disappears.

Not all assets have to go through all three stages, but in some cases it can. In any case, the two stages are common to all financial assets. From another perspective, we can distinguish two types of market according to the stage through which the financial asset passes:

A financial asset is issued, acquired by an investor and, from that moment, is traded on the secondary market. As we have indicated previously, it could happen that the financial asset goes through a third stage, its disappearance or extinction. For example, a 1-year treasury bill:

The treasury bill is issued and someone acquires it. From that moment, if the investor who acquired it in its issue, wanted to sell it, they would have to do so at the price dictated by the secondary market. Finally, after that year, the State that issued that letter, returns the money to the investor who has the title in their possession. At that moment, the title in particular disappears.

The characteristics of financial assets

Coins and notes, for example, are debt securities issued by the country’s central bank (European Central Bank in the case of the euro). Financial assets are increasingly represented by book entries rather than securities. An example of this could be bank accounts.

In this sense, the solvency risk of banks is being reduced and therefore they are becoming more liquid assets, causing people to pay more with bank cards instead of coins or bills. This causes banks to have more and more money in their hands and therefore more power.

One of the best known financial assets is stocks. A share is an aliquot part of the capital stock of a company. That is, if a company is divided into 100 shares, to buy it we would have to buy all 100 shares. We would, therefore, be 100% owners of the company.

Similarly, if we buy 30 shares, we would own 30% of the company. Although a share represents a part of a company, it is not a physical asset. It is not a table, a factory or a computer, you cannot see it (unless you have the title on paper). And in which case, we would see the paper, not its actual value.