Average cost is defined as the total cost divided by the number of units produced. It is the average cost of each unit produced. 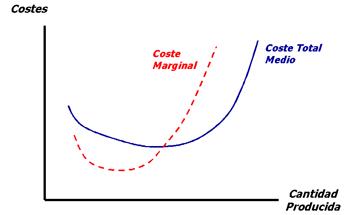 Average cost is a cost control measure of a company or organization that seeks to reflect the average cost per unit of production. It is calculated by applying the following formula:

Average fixed cost (CMeF) is calculated as the division between total fixed costs and the number of units produced. Since fixed costs are constant (independent of the level of production) when more units are produced, the CMeF will decrease. The foregoing reflects the fact that the more units the producer manages to manufacture, then the better it will be able to face high fixed costs since these are redistributed in a greater number of units.

The fixed average cost formula is as follows:

A good example is the case of the services of a doctor. Suppose the doctor needs to buy a surgical machine whose cost reaches 50,000 euros. The more patients the doctor has, the easier it will be for him to finance his investment. If the doctor only manages to sell 5 services a month, his fixed average costs will be 10,000 euros. However, if he manages to sell 100 services per month, his average fixed costs will be 500 euros, making it much easier for him to face this expense.

The average variable cost formula is as follows:

Shape of the average cost curve

In general, the average cost curve is U-shaped. At first it gradually descends until it reaches a minimum where it begins to rise slowly.

The relationship between the total cost curve, average cost, and marginal cost

Below we see a graph that presents the relationship between both cost concepts: