An issue at par is an issue of securities at their nominal value, the nominal value being the price paid for the security ( bill of exchange , action , obligation , public debt security , etc. ) when initially sold by the issuer . 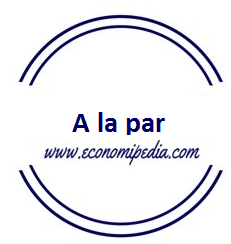 The issuance of financial securities is one of the ways that companies have to obtain financing in the financial markets. These securities can be stocks (equities) and obligations or bonds (fixed income).

In a capital increase, a par issue is considered to be a released issue, charged to the reserves that the company has and, therefore, does not require any disbursement for the shareholder, but it can also be a released issue in a percentage when it is paid by the investor and the other by the company, since it passes a part of voluntary reserves to capital. The share price will be set by the company after approval by the Shareholders’ Meeting.

The issuance of securities are part of the capital increases of a company in order to raise financing to cover its expenses, investments and projects that the company has to carry out its activity.

When a company makes an increase under par, the outlay is less than the par value of the share and, therefore, shareholders may be interested in acquiring those new shares that are going to be put into circulation.

Example of at par

The notional value of a share will be equal to the amount of capital plus reserves, divided by the number of shares:

To avoid this effect, it would be necessary to demand an issue premium from the new shareholders:

From the foregoing, it follows that the total issue premium should be 1,000,000 euros, which implies 5 euros for each of the new shares issued.

The new theoretical value of the share would be:

In other words, the same one that existed before the capital increase.

Issuance at par in fixed income

Bonds and obligations at par are those whose nominal value is that which is returned to the holder of the title on its expiration date. We can see in the image how the different bonds issued, a zero coupon (issued at a discount or issued by the nominal and repayment with premium), coupon at 7%, coupon at 10% and coupon at 13% at maturity, its amortization value is 100% of its nominal value, being called "at par".

The coupon of a bond or obligation is a payment to its holder of a certain percentage of the nominal value of the security, which can be annual, semi-annual, quarterly, monthly, etc.

Example of a par quote

If we have a security whose nominal value is 100%, and which is listed on the secondary or trading market:

Finally, we must emphasize that the theory tells us that fixed income securities can never be issued above par , since it would not make sense that the investor could be demanded more than the nominal value for the purchase of a bond or obligation. However, in the case of the vast majority of fixed income securities, the issue price coincides with the nominal value and the securities are issued at par, although in some cases the price may be lower or higher, depending on how they are issued. at a discount or with a premium.